A renaissance for agriculture 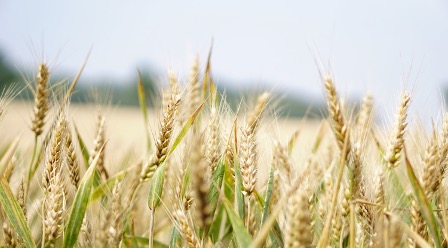 After a lost decade post-financial crisis, the agricultural sector is having a renaissance. The prices of soft commodities like corn and wheat increased over 20% in 2021, and this was before the Ukrainian conflict. The prices of everything from fertilisers to crop chemicals, and the companies exposed to the sector, are enjoying their most buoyant outlook in years. In this report, we revisit the agriculture (“Ag”) thesis, a couple of key stocks we like and what the recent war in Europe could mean in 2022 and beyond. 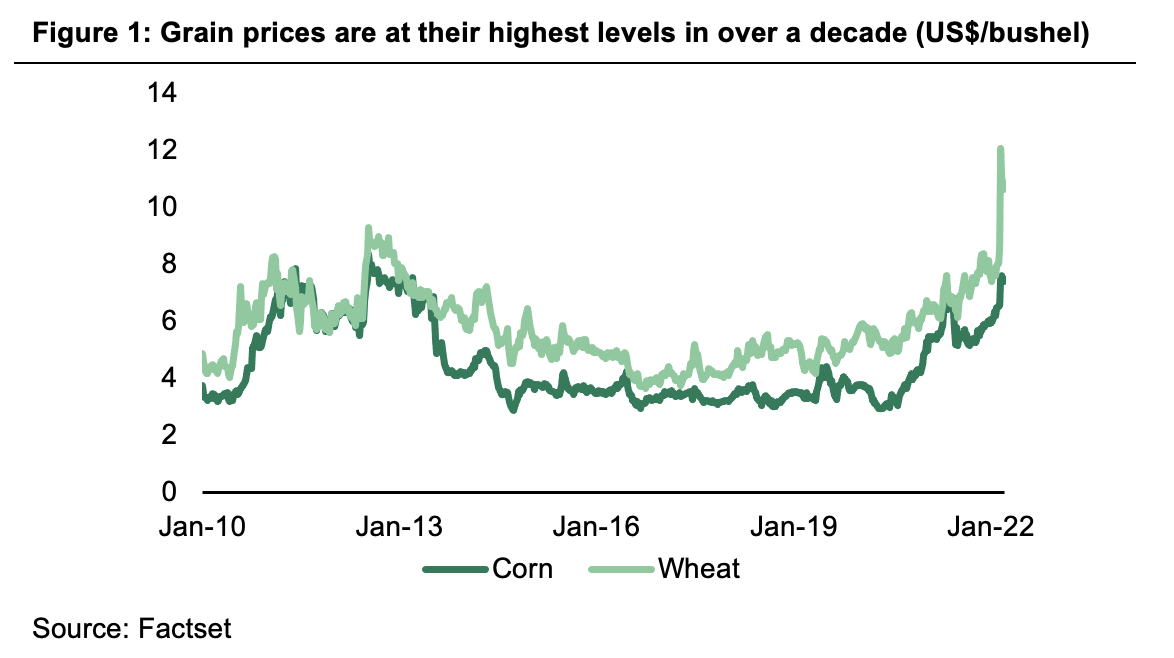 It starts with better fundamentals

Strength in crop markets fuelled by food security concerns was the catalyst for strong Ag performance last year. Inventories of key commodities like corn, soy and wheat have fallen to their lowest levels in decades. Poor seasonal weather and growing conditions have only added to supply-side pressures. The ‘stocks-to-use’ chart below (see Figure 2) illustrates just how tight supply is against a backdrop of rising demand. The global economic recovery and rising demand for biofuels have added to the dynamics supporting agricultural commodity prices. It is likely to take growers several years to rebuild grain stocks as a result. The timing of this is dependant again on growing conditions, as well as shipping delays and labour constraints. 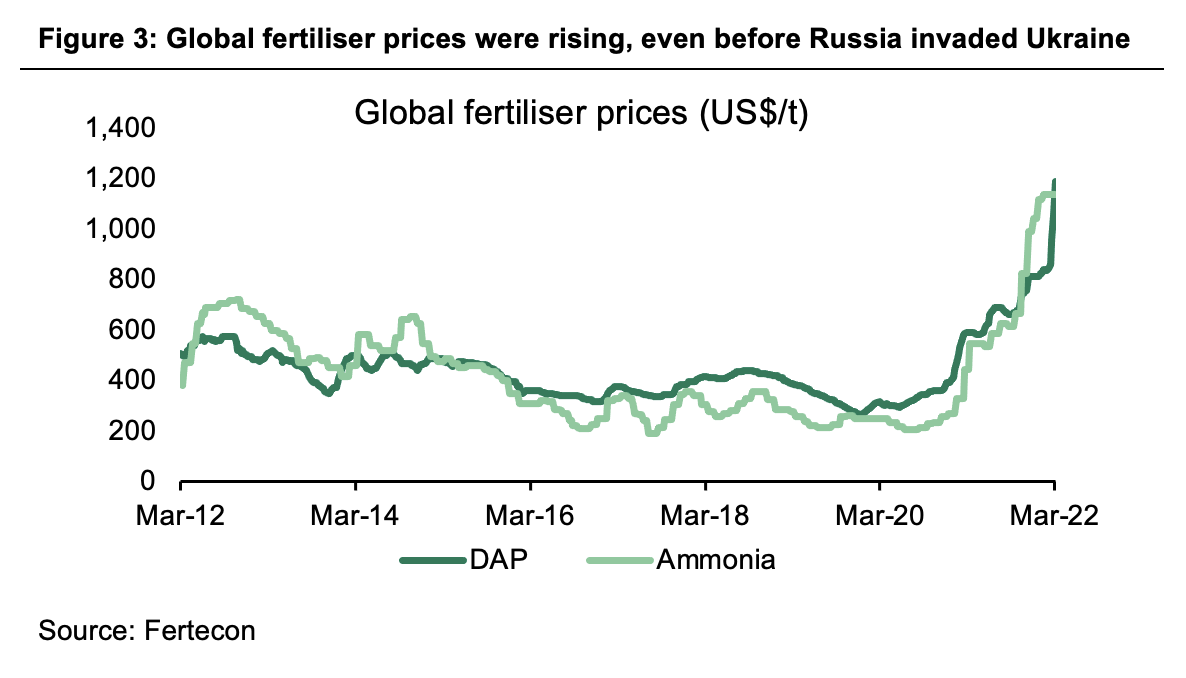 Why the Ukrainian conflict is likely to extend the cycle

As outlined above, supply and demand dynamics for agricultural commodities, fertilisers, and other crop inputs were stacked favourably even before war broke out in Ukraine. The conflict in Europe has compounded these dynamics, introducing additional potentially long-lasting effects to the outlook for global agricultural flows.

Russia and Ukraine have become emerging agricultural powerhouses in recent years. To put this into context, Figure 4 below highlights the importance of this region in key Ag and fertiliser commodity export markets. The swift sanctions on Russian exports, associated port closures, shipping delays and planting constraints this year have the potential to be one of the most disruptive events across the food and agricultural supply chain in decades. We believe there is limited ability for the rest of the world to compensate for Russian/Ukrainian grain production losses. Drought conditions in South America, and US acreage that already looks near max levels, will keep grain balances tight into 2023.

Improving grower balance sheets will support willingness to invest in farm inputs and nutrients. However, we need to keep a watch on potential demand destruction if the prices of these commodities continue to rise unabated.

The importance of Russia and Ukraine as fertiliser nutrient exporters is clear. However, there are also knock-on effects from indirect impacts such as global gas prices. Gas is the main input required to produce fertilisers, and Russia and Ukraine supply a third of Europe’s gas. Europe in turn accounts for 20% of global nitrogen supply. European gas storage was already running 20% below average before the Ukrainian conflict began, and Germany’s move to cancel the new Nordstrom 2 gas pipeline from Russia further hurts Europe’s ability to source gas. European gas prices have reacted, rising 7-fold over the year, which is placing immense pressure on European industrial production costs. We have seen large users of gas, such as ammonia producers, curtail or idle production, further pressuring the supply and demand backdrop. In the last week, we have seen the price of ammonia for April settlement spike over 40%.

Current peak prices are not sustainable, and no one expects them to persist. However, assuming mean reversion to pre-conflict pricing is also overly simplistic. If the geopolitical landscape is any guide, we could be moving to a bifurcated world where a resolution to the current conflict is unlikely to mean a normalisation of trade relations with Russia. This will have a permanent impact on supply chains and production costs, and most importantly may mean sustained higher prices over a longer period to encourage new production capacity in regions friendly to Western economies.

Two stocks to get Ag exposure

Firetrail’s Australian equities Funds own Incitec Pivot and Nufarm. We have recently added to both positions following greater confidence in the current Ag cycle.

Incitec is one of a handful of Australian integrated industrial manufacturing businesses. It produces and distributes nitrogen-based fertilisers and explosives in Australia and the US. The company has long-term gas supply arrangements in Australia and accesses cheap gas in the US compared to more expensive regions such as Europe, providing a major cost advantage when global energy prices are rising.

The current pricing environment for fertilisers leaves Incitec positioned for a multi-period earnings upgrade cycle as consensus expectations catch up to the higher pricing backdrop. We expect stronger cashflows to drive an uplift in shareholder returns primarily through buybacks alongside some growth investment.

Incitec’s valuation also remains compelling despite the strong share price performance over the last 12 months. The stock trades at a significant discount to global peers providing scope for a further re-rating of the shares.

Nufarm sells crop protection chemicals to farmers in Australia and New Zealand, North America, and Europe. The company is also in the process of commercialising its omega-3 canola seed and Carinata bio-fuels seed strategies.

The favourable backdrop for grain prices should be a tailwind for input demand such as crop protection chemicals. The conflict in Ukraine is also triggering a global shift in focus towards food security and self-reliance. Nufarm generates half of its sales from Europe, putting it in good stead to benefit from this trend in coming years. This is something we don’t believe is being captured in consensus expectations. In the shorter term, we see further upside to market forecasts from a continuation of favourable seasonal conditions and tight global supply chains, which is increasing famers’ willingness to pay higher prices for crop inputs.

Nufarm’s stock price has re-rated in 2022 following a better earnings outlook in crop protections and growing appreciation for the growth optionality of the seeds strategies. We believe there is some way to go before this upside is fully reflected in both earnings forecasts and valuation multiples.

The agriculture sector has enjoyed a renaissance over the last 12 months thanks to a cocktail of favourable factors. Food security concerns, seasonal conditions, the global economic recovery and rising demand for biofuels have driven soft commodity and fertiliser prices higher. Given Russia and Ukraine are major soft commodity exporters, the war has only exacerbated these favourable conditions.

Firetrail believe it will be some time before tight supply and demand conditions ease. We see considerable upside in the share prices of Incitec Pivot and Nufarm and have recently increased our positions in these stocks as a result.

This article is prepared by Firetrail Investments Pty Limited (‘Firetrail’) (ABN 98 622 377 913, AFSL 516821) as the investment manager of the Firetrail Australian High Conviction Fund (ARSN 624 136 045), the Firetrail Absolute Return Fund (ARSN 624 135 879), the Firetrail Australian Small Companies Fund (ARSN 638 792 113) and the Firetrail S3 Global Opportunities Fund (ARSN 653 717 625) (‘the Funds’). Pinnacle Fund Services Limited ('PFSL') (ABN 29 082 494 362, AFSL 238371) is the product issuer of the Fund. PFSL is not licensed to provide financial product advice. PFSL is a wholly-owned subsidiary of the Pinnacle Investment Management Group Limited (‘Pinnacle’) (ABN 22 100 325 184). The Product Disclosure Statement (‘PDS’) and Target Market Determination (‘TMD’) of the relevant Fund are available via the links below. Any potential investor should consider the PDS and TMD before deciding whether to acquire, or continue to hold units in, the Fund.

This communication is for general information only. It is not intended as a securities recommendation or statement of opinion intended to influence a person or persons in making a decision in relation to investment. It has been prepared without taking account of any person’s objectives, financial situation or needs. Any persons relying on this information should obtain professional advice before doing so. Past performance is for illustrative purposes only and is not indicative of future performance.

Whilst Firetrail, PFSL and Pinnacle believe the information contained in this communication is reliable, no warranty is given as to its accuracy, reliability or completeness and persons relying on this information do so at their own risk. Subject to any liability which cannot be excluded under the relevant laws, Firetrail, PFSL and Pinnacle disclaim all liability to any person relying on the information contained in this communication in respect of any loss or damage (including consequential loss or damage), however caused, which may be suffered or arise directly or indirectly in respect of such information. This disclaimer extends to any entity that may distribute this communication.

Any opinions and forecasts reflect the judgment and assumptions of Firetrail and its representatives on the basis of information available as at the date of publication and may later change without notice. Any projections contained in this presentation are estimates only and may not be realised in the future.

Unauthorised use, copying, distribution, replication, posting, transmitting, publication, display, or reproduction in whole or in part of the information contained in this communication is prohibited without obtaining prior written permission from Firetrail. Pinnacle and its associates may have interests in financial products and may receive fees from companies referred to during this communication.

This may contain the trade names or trademarks of various third parties, and if so, any such use is solely for illustrative purposes only. All product and company names are trademarks™ or registered® trademarks of their respective holders. Use of them does not imply any affiliation with, endorsement by, or association of any kind between them and Firetrail.

Seeing the forest for the trees

The good oil… getting clean exposure to energy markets